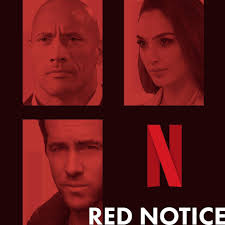 Netflix is breaking out the BIG guns for Red Notice. The high-octane high-budget high-caliber cast is led by Dwayne Johnson, along with Gal Gadot and Ryan Reynolds. Wonder Woman and Deadpool! Writer/director Rawson Marshall Thurber is at the helm for his third movie with The Rock after Central Intelligence and Skyscraper.

Red Notice is said to have a big budget over $125 million, with Dwayne Johnson reportedly picking up a $20 million check. Half of that may have gone to his dapper suit in the first photo he shared from the movie set:

Or maybe it went to pay for all the slates. I think that shot just needs a few more! Dwayne Johnson looks pretty suave in his tux to play a government profiler in Red Notice. And is he holding a platter or some kind of shield? I wonder if this particular scene is set in an art gallery setting tied to Gal Gadot's character.

Speaking of Gal Gadot, she shared a shot of her script back on January 14, 2020 to mark the start of her Red Notice journey with these guys: